If you have any feedback, testimonies and stories from the Prayer Room, please Contact Us and tell your story

We encouraged the Christians of Chelmsford to join the 2017 Global Thy Kingdom Come Prayer Initiative by coming to spend time in our 48 hour Prayer Room for Chelmsford, 8 am Friday 2nd, to 8 am, Sunday 4th June – Pentecost Sunday- at Meadgate Church, Great Baddow.

Although based at an Anglican Church, this was for the whole City!

We wanted to encourage Christians of all denominations and traditions, from across Chelmsford, to form part of the ‘Great Wave of Prayer’ across the World.

The Prayer Room was  set up in the main part of the church and was open continuously for 48 hours. We encouraged people to sign up using our on-line Calender and if possible to come along for at least one hour during that period. Many stayed for longer, returned again later and some simply turned up un announced for a brief period as their schedule allowed. One couple told us that they came for an hour and ended up staying for three!

In the end, somewhere around one hundred and twenty people joined us and only for one or two short periods during the second night did we only have our two nominated Supervisors in the Room. Many people expressed the amazing sense of God that was present and the ability to quietly encounter and easily hear from Him, guided by various themed Prayer Stations.

The central theme of Thy Kingdom Come was to see people 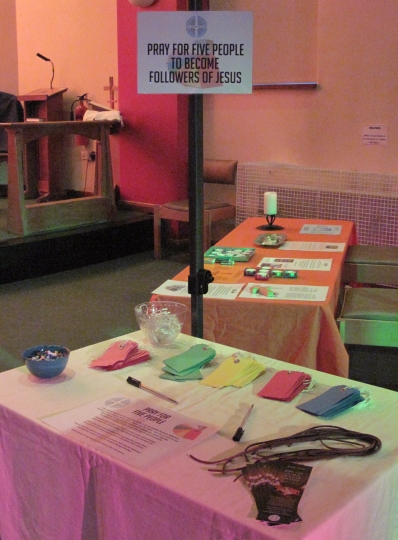 become followers of Jesus Christ and in particular we encouraged those attending to come along with five people in mind, family, friends, neighbours colleagues, or indeed anyone they knew who were not yet Christians.

There was a particular Prayer Station, which included a large Cross upon which attendees pinned names with encouragement to them and those that followed to pray for those named to respond to the life changing Gospel message of Jesus Christ.

By the end all but a handful of the two-hundred and fifty coloured labels provided for that purpose were pinned to the Cross, upon each written either a single name, or in many cases five or more! We are firmly believing that God will move in the hearts of the maybe three-hundred plus people who were lifted up to God. 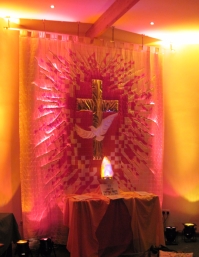 To be an effective Witness for Jesus Christ, we need the empowerment of The Holy Spirit. Before Jesus ascended to Heaven, he promised His followers that His Father would send them a ‘gift’ that would ‘baptise’ and fill them and give them strength and power to be His witnesses. He surely did! You can read more in Acts Chapter 1 & 2.

A Prayer Station involving a moving ‘flame’, back-lit in red, orange and yellow, gave people opportunity to explore and to ask to receive the fulness, the ‘Baptism of the Holy Spirit’, and His ‘Gifts’, together with the ‘Fruits’, that are still available today. More than one person was seen during the 48 hours, prostrated on the floor seeking The Holy Spirit’s power in their own life. 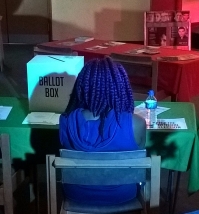 We did not believe that it was a co-incidence that our Nation had been called to a General Election, just 4 days after Thy Kingdom Come. We had an amazing opportunity to pray for our future Government and political landscape – that those God chooses will be elected into power.

We had a Prayer Station that enabled people to put prayers and petitions into a ‘Ballot Box’, to ask that God’s will be done. Many dozen ‘Ballot papers’ were deposited with heartfelt prayers that God would give us the Government that He wanted.

A tremendous thank you to Meadgate Church and all those who helped and contributed in any way to making the 48 hours of Prayer such an amazing time. We know that you and your prayers have and will well into the future be instrumental in transforming lives as God pours, in His own way and timing, the answers back to earth. Thy Kingdom Come.